Parts 1 through 3 of this four-part series on developing Web services in Java SE first presented an overview of Web services and Java SE’s support for developing them. The series then focused on developing SOAP-based and RESTful Web services via this support. Part 4 wraps up this series by focusing on advanced topics.

This article first introduces Java SE’s SAAJ API for working with SOAP-based Web services at a lower level. It then discusses how to create a JAX-WS handler to log the flow of SOAP messages. Next, the article teaches how to create and install a custom lightweight HTTP server to perform authentication.

Moving on, you’re shown how to create a RESTful Web service that returns attachments (e.g., a JPEG image) to its clients. You then dig deeper into JAX-WS by exploring the interplay between providers and dispatch clients, and learn how to create a dispatch client that accesses the javax.xml.transform.Source instance returned from a Web service provider’s invoke() method via a different Source instance in another version of Part 3‘s LibraryClient application.

This section first presents an overview of SOAP message architecture. It then takes you on a tour of SAAJ. When this tour finishes, I present an application that uses this API to access a SOAP-based Web service (written in PHP) for converting between integer values and Roman numerals. This application reinforces your understanding of SAAJ.

A SOAP message is an XML document sent from an initial SOAP sender node to an ultimate SOAP receiver node, mostly likely passing through intermediate SOAP sender/receiver nodes along its path. A SOAP node is processing logic that operates on a SOAP message.

The SOAP document consists of an Envelope root element that encapsulates an optional Header element and a nonoptional Body element — see Figure 1.

Figure 1. A SOAP message’s architecture consists of an optional Header element and a mandatory Body element within an Envelope element 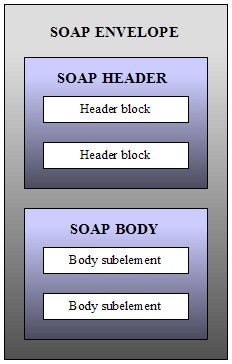 The Header element specifies application-related information (such as authentication details to verify who sent the message) via immediate child elements known as header blocks. A header block represents a logical grouping of data that can target an intermediate SOAP node or the ultimate receiver node.

Although header blocks are defined by the application, their start tags may contain the following SOAP-defined attributes to indicate how SOAP nodes should process them:

The Fault element contains error and status information that a Web service returns to a client. SOAP 1.1 specifies the following child elements of Fault:

Listing 1. A SOAP message for calling a SOAP-based library Web service’s getTitle() function to retrieve a book’s title when given its ISBN

This SOAP message describes a request to a library Web service to execute its getTitle() function. Furthermore, it describes the type and value of the ISBN argument passed to this function’s isbn parameter.

The message begins with the SOAP-ENV-prefixed tag, which describes the SOAP message’s envelope. The commonly used SOAP-ENV prefix corresponds to the SOAP 1.1 namespace that provides the schema for SOAP envelopes. The xsd and xsi prefixes correspond to the XML Schema structures and XML Schema Instance namespaces, and are used to denote the XML Schema type that describes the kind of data being passed to getTitle() (a string) via the isbn element.

The empty Header element signifies that there is no SOAP header. In contrast, the Body element identifies a single getTitle operation request.

SAAJ is a small Java SE API that lets you perform the following tasks:

SAAJ is associated with the javax.xml.soap package, which contains 14 interfaces and 13 classes. Various interfaces and classes extend their counterparts in the org.w3c.dom package, implying that part of a SOAP message is organized as a tree of nodes.

The following classes and interfaces are used to specify the structure of a SOAP message:

Working with SAAJ involves creating a SOAP connection, creating SOAP messages, populating each message with content and optional attachments, sending the messages to an endpoint and retrieving replies, and closing the connection.

After instantiating MessageFactory, call one of the following methods to create a SOAPMessage instance:

The following example shows you how to instantiate the factory and create a SOAPMessage object that’s ready to be populated:

Populating a SOAP message with content and optional attachments

SOAPMessage describes a SOAP message optionally followed by MIME-typed attachments. The SOAP message part of this object is defined by an instance of a concrete subclass of the abstract SOAPPart class.