Daniel Bader: The Meaning of Underscores in Python

The Meaning of Underscores in Python

The various meanings and naming conventions around single and double underscores (“dunder”) in Python, how name mangling works and how it affects your own Python classes. 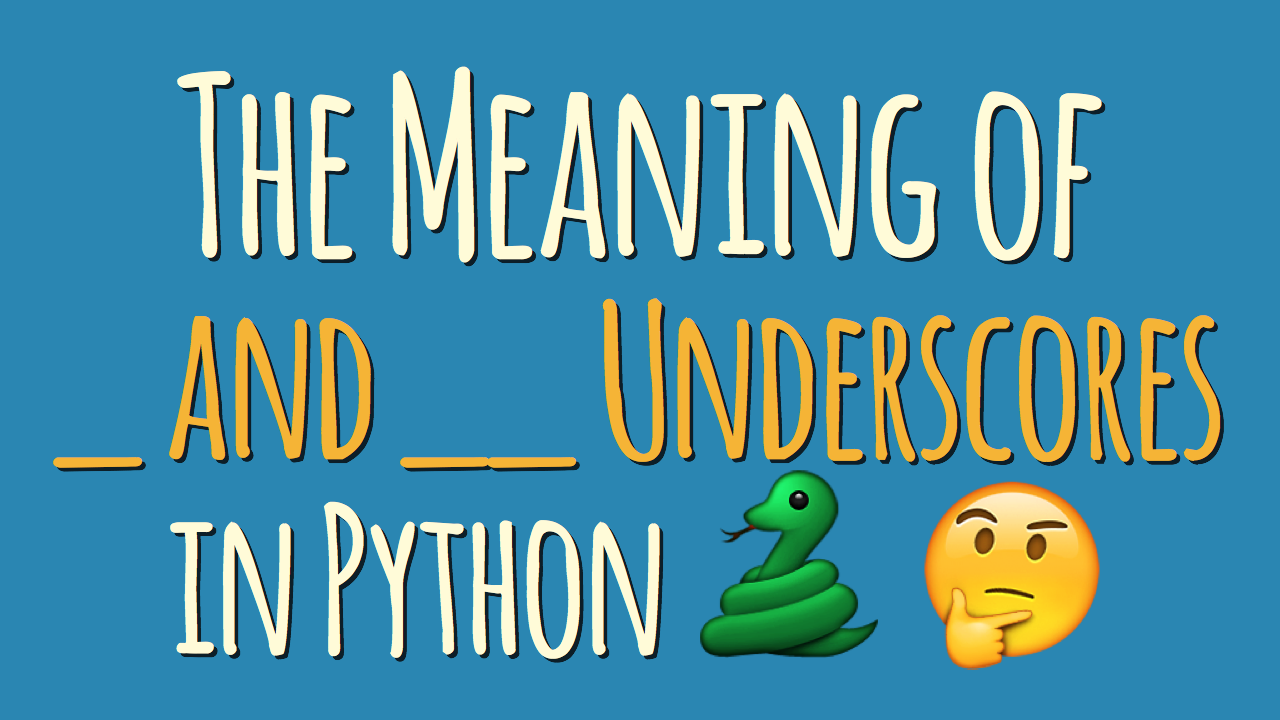 Single and double underscores have a meaning in Python variable and method names. Some of that meaning is merely by convention and intended as a hint to the programmer—and some of it is enforced by the Python interpreter.

If you’re wondering “What’s the meaning of single and double underscores in Python variable and method names?” I’ll do my best to get you the answer here.

In this article I’ll discuss the following four underscore patterns and naming conventions and how they affect the behavior of your Python programs:

At the end of the article you’ll also find a brief “cheat sheet” summary of the four different underscore naming conventions and their meaning, as well as a short video tutorial that gives you a hands-on demo of their behavior.

When it comes to variable and method names, the single underscore prefix has a meaning by convention only. It’s a hint to the programmer—and it means what the Python community agrees it should mean, but it does not affect the behavior of your programs.

The underscore prefix is meant as a hint to another programmer that a variable or method starting with a single underscore is intended for internal use. This convention is defined in PEP 8.

This isn’t enforced by Python. Python does not have strong distinctions between “private” and “public” variables like Java does. It’s like someone put up a tiny underscore warning sign that says:

“Hey, this isn’t really meant to be a part of the public interface of this class. Best to leave it alone.”

Take a look at the following example:

What’s going to happen if you instantiate this class and try to access the foo and _bar attributes defined in its __init__ constructor? Let’s find out:

You just saw that the leading single underscore in _bar did not prevent us from “reaching into” the class and accessing the value of that variable.

That’s because the single underscore prefix in Python is merely an agreed upon convention—at least when it comes to variable and method names.

However, leading underscores do impact how names get imported from modules. Imagine you had the following code in a module called my_module:

Now if you use a wildcard import to import all names from the module, Python will not import names with a leading underscore (unless the module defines an __all__ list that overrides this behavior):

By the way, wildcard imports should be avoided as they make it unclear which names are present in the namespace. It’s better to stick to regular imports for the sake of clarity.

Unlike wildcard imports, regular imports are not affected by the leading single underscore naming convention:

I know this might be a little confusing at this point. If you stick to the PEP 8 recommendation that wildcard imports should be avoided, then really all you need to remember is this:

Single underscores are a Python naming convention indicating a name is meant for internal use. It is generally not enforced by the Python interpreter and meant as a hint to the programmer only.

Sometimes the most fitting name for a variable is already taken by a keyword. Therefore names like class or def cannot be used as variable names in Python. In this case you can append a single underscore to break the naming conflict:

In summary, a single trailing underscore (postfix) is used by convention to avoid naming conflicts with Python keywords. This convention is explained in PEP 8.

The naming patterns we covered so far received their meaning from agreed upon conventions only. With Python class attributes (variables and methods) that start with double underscores, things are a little different.

A double underscore prefix causes the Python interpreter to rewrite the attribute name in order to avoid naming conflicts in subclasses.

This is also called name mangling—the interpreter changes the name of the variable in a way that makes it harder to create collisions when the class is extended later.

I know this sounds rather abstract. This is why I put together this little code example we can use for experimentation:

Let’s take a look at the attributes on this object using the built-in dir() function:

This gives us a list with the object’s attributes. Let’s take this list and look for our original variable names foo, _bar, and __baz—I promise you’ll notice some interesting changes.

So what happened to __baz?

If you look closely you’ll see there’s an attribute called _Test__baz on this object. This is the name mangling that the Python interpreter applies. It does this to protect the variable from getting overridden in subclasses.

Let’s create another class that extends the Test class and attempts to override its existing attributes added in the constructor:

Now what do you think the values of foo, _bar, and __baz will be on instances of this ExtendedTest class? Let’s take a look:

Wait, why did we get that AttributeError when we tried to inspect the value of t2.__baz? Name mangling strikes again! It turns out this object doesn’t even have a __baz attribute:

As you can see __baz got turned into _ExtendedTest__baz to prevent accidental modification:

But the original _Test__baz is also still around:

Double underscore name mangling is fully transparent to the programmer as long as the variable is accessed through the self object. Take a look at the following example that will confirm this:

Does name mangling also apply to method names? It sure does—name mangling affects all class attributes that start with two underscore characters (“dunders”):

Now this was a lot of stuff to absorb. To be honest with you I didn’t write these examples and explanations down off the top of my head. It took me some research and editing to do it. I’ve been using Python for years but rules and special cases like that aren’t constantly on my mind.

Sometimes the most important skills for a programmer are “pattern recognition” and knowing where to look things up. If you feel a little overwhelmed at this point, don’t worry. Take your time and play with some of the examples in this article.

Make these concepts sink in enough so that you’ll recognize the general idea of name mangling and some of the other behaviors I showed you. If you encounter them “in the wild” one day, you’ll know what to look for in the documentation.

I’ve you’ve heard some experienced Pythonistas talk about Python or watched a few conference talks you may have heard the term dunder. If you’re wondering what that is, here’s your answer:

For example, you’d pronounce __baz as “dunder baz”. Likewise __init__ would be pronounced as “dunder init”, even though one might think it should be “dunder init dunder.” But that’s just yet another quirk in the naming convention.

Perhaps surprisingly, name mangling is not applied if a name starts and ends with double underscores. Variables surrounded by a double underscore prefix and postfix are left unscathed by the Python interpeter:

However, names that have both leading and trailing double underscores are reserved for special use in the language. This rule covers things like __init__ for object constructors, or __call__ to make an object callable.

These dunder methods are often referred to as magic methods—but many people in the Python community, including myself, don’t like that.

It’s best to stay away from using names that start and end with double underscores (“dunders”) in your own programs to avoid collisions with future changes to the Python language.

Here’s a quick summary or “cheat sheet” of what the four underscore patterns I covered in this article mean in Python:

Watch a short video tutorial to see first-hand how things like double underscore name mangling work in Python and how they affect your own classes and modules:

Did I miss anything in this explanation? Want to add your own thoughts on the matter? Leave a comment below, I’d appreciate it.